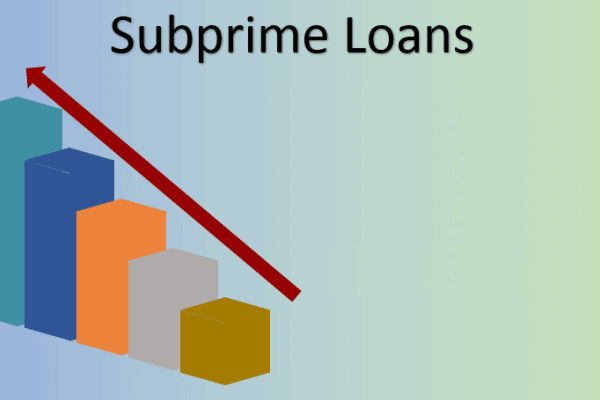 Not all of us are able to enjoy a perfect credit record; events outside of our control sometimes happen, and not a few peoples’ records have slipped because of surprise medical bills, increases in mortgage premiums and interest rates, sudden unemployment and other negative factors.

Since the recession struck in 2007 even more people have suffered from falling credit scores in spite of working hard and doing all in their power to get their bills paid in full and on time.

If your credit score has plunged you may find that lenders are turning you away at the door and refusing to consider you for a mortgage. That doesn’t mean you can’t buy a home of your own though. You just need to start looking into subprime loans instead of traditional loans.

A subprime-loan can also be known as a near-prime or non-prime loan, and sometimes as second-chance lending.

These loans are sometimes given to people who may even have difficulty paying them back on a timely basis. Another candidate for a sub-prime loan would be someone who doesn’t have a lot of money to use for a down payment on a house.

While a sub-prime loan may enable you to get the home you want, you will pay a price for it in terms of your interest rate, which will be much higher, and also perhaps loan terms which aren’t as friendly to you as they are to the lender. You may have no other real options though, and this may simply be what you have to be willing to do to buy a house.

These days there are so many people who need sub-prime loans to get a house that it’s become a major market. There is a lot of money to be made in sub-prime lending, so it’s becoming more common and it’s getting easier to find a sub-prime loan if that’s what you need.

There are reasons other than failure to pay your bills on time which can cause your credit rating to be unacceptable to other lenders too.

Young people often have trouble acquiring ordinary loans since their limited credit experience means their records are fairly blank—in the case of no credit, lenders simply assume that if you did have credit, it’d be the very worst.

Another problem which can prevent young people from getting a normal loan is a lack of personal property which has monetary worth. With no real valuable property to use as collateral, there is no way to get a secured loan.

Without having good credit to your name, getting an unsecured loan is usually impossible—which is why it isn’t just people with bad credit who turn to sub-prime lenders. It is often just people who aren’t recognized fully by mainstream lenders.

One of the reasons for the housing market crisis was that many subprime borrowers were seduced by the low initial interest rates of adjustable rate mortgages (ARMs).

These interest rates later ballooned on them, making it difficult or impossible for them to continue paying their mortgage in full and on time. That is one of the many reasons many borrowers are now in default and in danger of losing their homes for good.

Does that mean you shouldn’t get a subprime loan?

Not necessarily, but it does mean that you should be fully informed of the risks of whatever type of loan you are getting.

You can search for a fixed-rate version of a subprime loan if you are more comfortable with that alternative; this can be particularly wise if you plan to be in your home for a long time, for example for decades.

ARMs are good for people who don’t plan to inhabit their homes for long though—if you’re just looking for a way to finance a house for a few years, an ARM can provide you with lower interest rates while you’re there.

Subprime loans are making mortgages available to more people than previously could qualify for a home loan. If you have low credit or a short credit history or no assets to use as collateral, look into subprime lending to see if a new home could be in your future.